The most recent figure paintings are self portraits that were a continuation of previous work as well as the insistence on self due to isolation. This group was interrupted by the lockdown, the work was begun last Feb was picked up again in September.

I use photos as a guide, the figures appear to be an extension of the room, when people, i.e. the viewer is in the space in front of the painting the dynamic changes and a new relationship takes hold. I'm setting up a stage and a dialogue with the viewer that varies with intensity and mood.

I've provoked some strong reactions to some of the nude self portraits in the past. It is a multi-faceted approach to understanding myself and how I inhabit this body from the inside out. At 50 I painted myself in a handstand and other feats as a celebration of vitality. At 63 I'm painting myself again, mostly crouching as if I want to hide or be noticed but I'm not sure which. I need to say something but can't. If some are more sexual or not that is part of life and art too. I use the objects, fabric and light situations as psychological props. The series is a work in progress and the intention grows as I develop new ways to integrate the props.

The close ups of construction sites and scaffold are a vertical cityscape: a vertical grid and record of the New York City in flux and change as the the new replaces the old. Akin to Gerhard Richter's Cities,* this work chronicles the enormous changes in New York City and reflects the preservation of historic and sacred spaces, notably Old St. Paul's Church in Lower Manhattan and St. Patrick's Cathedral.
This group relates to previous series because all groups are architectonic. The previous cityscapes are mostly vertical canvasses, paintings of structures emphasizing top and side. The figure paintings are partly about the way the volumes within the space of the painting relate to the body or location of the viewer(or maker). In all the "point of view" is specific and established. The painting acts as an extension of the room, like a mirror or window, containing structures that relate to the position of the viewer's body in space.
In the painting "Fugue" the cubic and rectangular shapes repeat and echo in ways that were not anticipated. While the literal subject is in fact a constuction site with complicated scaffold, the patterns of cubes, parallelograms and other geometric shapes form and repeat in overlapping patterns in space. Through playing and singing, particularly the music of Bach, I became fascinated by the structure of the fugue and counterpoint. In a fugue there is a subject, the repeating phrase that is like a sentence, which repeats in three or four overlapping voices. In a canon (or round), the voices overlay and begin at staggered intervals. The more one plays a fugue the more one notices the hidden subject lines. It is uncanny, the structure lends itself to discovery 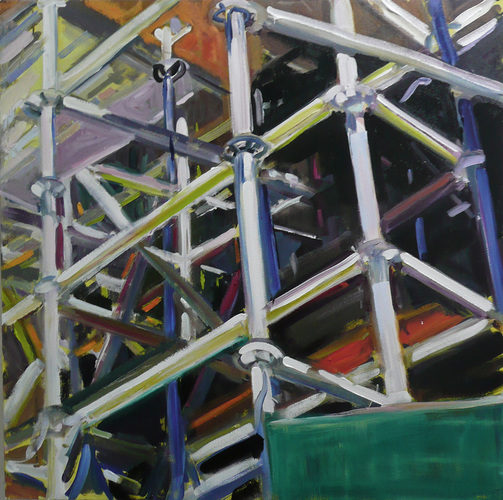 I feel a relationship through pattern and physical space. In Painting, my engagement ultimately in some way relates back to the physical position of the body in space.

The transparencies of late, or seeing through the glass is a new theme, something that I've only begun to explore in 2018. There is no end to the things that happen visually within the glass, any change behind or around it is a whole new circumstance. It is like water, ever changing and challenging to paint. 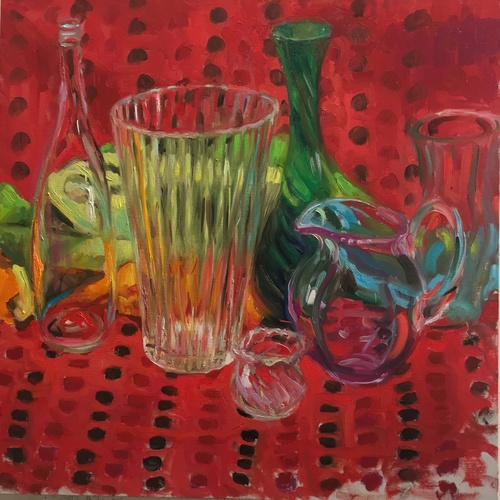